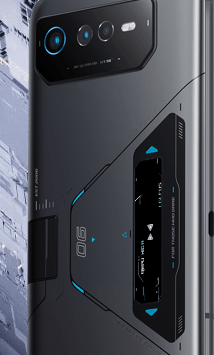 Asus has arguably been the top dog of the mobile gaming scene. For quite a while now and today we have their Rog phone 6D ultimate. The mediatek demensity chipset until now all of the Rog phones have been with Snapdragon silicon. And there’s both an Ultimate model and a non ultimate one. When it comes to the design the 6D ultimate is pretty much the same as the rog6 pro. Which we reviewed a few months ago the glass build is virtually identical. But in gray and you again get the colorful OLED panel on the back that can display custom graphics. Another cool and useful feature is the ultrasonic shoulder triggers which add an extra level of control to your games.

The motorized air duct called the aero active portal it consists of a thin Vapor chamber with dissipation fins which can raise up to expose an airway directly to the internal cooling system. Asus assures us that there are no durability concerns about this mechanism as it employs the same. Tech they’ve used for the flip cameras on three generations of zenfones the portal should be good for at least 40000 open and closed cycles and in spite of it the phone. Still has an ipx4

rating against water splashes. The New Port isn’t really meant to be open just by itself it works in conjunction with the Aero active cooling fan. This allows access for that moving air to come in and cool things more efficiently up to nine times more. Efficiently according to Asus’ claims luckily you get the aero active cooler 6 in the Box here with the 60 non-ultimate and the 6 Pro it has to be purchased separately.

We’ll get into The Thermals in a second but first let’s touch upon the 6D Ultimus chipset a top of a line mediatek demensity 9000 plus with the high Performance. X mode plus turned on in the

active cooling fan enabled this is some of the best Peak Performance you can get on an Android phone. And games run as smooth as butter too this is the first time we’ve seen anything other than Snapdragon silicon. In  Rog phone and in benchmarks the RG phone 6 Pro with its Snapdragon 8 plus gen 1 does have the edge. When it comes to GPU scores the differences are small though. Now for The Thermals when in the default Dynamic mode the 6D ultimate does undergo some gradual thermal throttling without sudden dips that could cause hiccups in game.

If you bump things up to the X mode for extra performance the throttleing is much heavier and it’s actually a lot more than what we experienced. With the Rog phone 6 Pro this is without any

cooling fan attached. With the cooling fan you unlock the highest performance mode X mode plus and the fan plus aeroactive portal seem to make a big difference the stability is great and a high level of sustained performance though for some reason it. Still isn’t quite as high as on the It  has a large 6000 million power battery battery life is solid here with an endurance rating of 103 hours. Though that is significantly less than the 119 hour rating of the rog6 pro since the screen on times are almost identical it seems that the higher standby power draws to blame for this lower rating.

At least the charging speed is consistent you get the same support for 65 watt charging. And we were able to charge the phone from 0 to 78 percent in half an hour. Most of the other features of the 6D ultimate are exactly the same as the Rog phone 6 Pro.

There’s an advanced 6.78 inch AMOLED display on the front with a 1080p resolution victis protection and support for HDR 10 plus and 10 bit color. Plus it’s an Adaptive 165hz refresh rate and for audio you get both a traditional headphone jack. And a pair of loud front-facing stereo speakers the interface is the same as well. It’s a custom Rog UI on top of Android 12 and it provides a ton of options for your games and performance. You can two things to a level that you won’t find with the competition. And the Rog phone 6D ultimate supports. All of the same Rog accessories and peripherals as the 6 Pro most of which are sold separately.

The camera performance which on these sorts of gaming devices takes a back seat to the rest of the package. On the back there is a 50 megapixel main camera a 13 megapixel Ultra wide Cam and a 5 megapixel macro cam the same setup as the rog6 pro. But there are some minor differences in processing due to the new chipset.

The main Cam’s 12.5 megapixel photos are solid with balanced color saturation good contrast and plenty of Sharpness. The dynamic range is in the widest but it’s okay.

13 megapixel photos from the ultra wide can hold up very well too the level of detail. Is great for this sort of camera sharpness is good and the colors are a close match to those from the main cam. 5 megapixel close-ups from the macro cam are decent but nothing special. Because the minimum Focus distance is not very short you can’t get as close to the subject as you can with some other macros out there in low light conditions. the 6D ultimate can shoot okay photos with its main cam these have a good amount of detail. But dynamic range is

limited there is a dedicated night mode that you can switch on and while these shots take a few more seconds to capture you get more detail. more sharpening and less noise. The dynamic range is wider too the ultra wide cam struggles at night photos are dark blurry and noisy. there is support for night mode on this camera too and the results are much improved. we are pretty pleased with the performance of the 12 megapixel selfie camera it captures plenty of detail and

colors. 4K video from the ultrawide has plenty of detail and also has Lively colors the contrast and dynamic range are decent too. The 6D ultimate can apply electronic stabilization to any of his cameras at all resolutions it works very well too smoothing out both big and smaller bumps

get a flagship gray device that’s pretty much. The best you can find on the mobile gaming Market when comparing the two phones though I’m not sure that this one deserves the ultimate title they both go.

About the price when you factor in the price of the aeroactive cooler but the 6 pro has lower standby battery draw and slightly better GPU scores. And most importantly with this Qualcomm

silicon it has better thermal performance. Both with and without the fan regardless of the fact that it doesn’t have the new Aero active portal. Still if you can’t find the 6 Pro in a store near you due to whatever reason the 6D ultimate is 95% is good. And it’s well worth recommending. Snapchat Plus: The Next Stage Of Snapchat That You Should Care About

Snap, Inc., the parent company of Snapchat, is working on a paid subscription called Snapchat Plus. This service would offer...

The Nokia X200 Specification And Features

Best Cooler AC is much cheaper and better than any cooler

Earn money on Youtube, be sure to keep these things.